Início English The UFOs of Alexander the Great 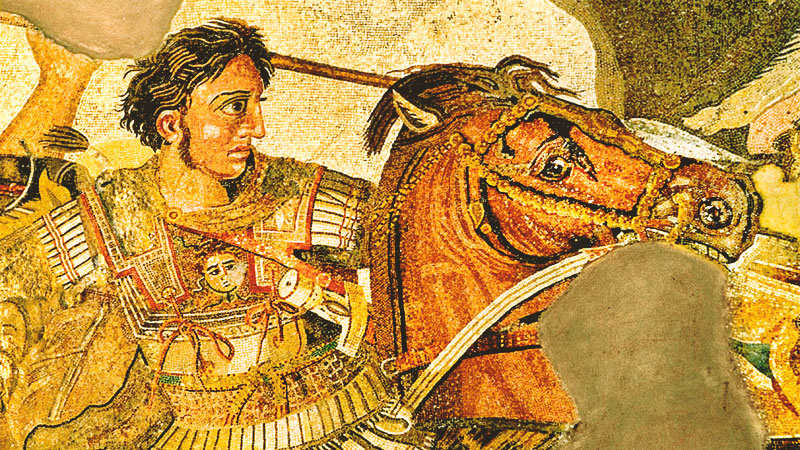 Alexander the Great was an important king of Macedonia, who lived in the 4th century BC and, in just 33 years of life, he defeated the Persians and conquered the greatest empire of his time and is therefore considered one of the greatest military leaders of antiquity.

His victories are marked not only by his talent as a strategist, but also by some strange stories involving the participation of UFOs.

Determined to invade India, Alexander and his army were trying to cross the Indo River to face the Indian army when “Shiny Silver Shields” descended and made several passes over the battlefield.

These “Shiny Silver Shields” had a frightening effect on their horses, causing their cavalry to deband, but not only were Alexander’s troops affected, the strange flying objects also had a similar effect on the horses and elephants of the Indian army, and so it is difficult to determine which side these shimring flying objects were on, or even whether they were on either side. However, after leaving the battle victorious, Alexander decided not to pursue his campaign for India.

Seven years later, Alexander was faced with the greatest challenge of his military career. In his attempt to conquer the Persian Empire, he realized that the city of Tyre needed to be captured to prevent the Persians from using that port to land their armies.

The original coastal town of Tyre had been destroyed before and after rebuilt some distance from the coast of its original location. Without a navy, Alexander decided to use the remains of the old town to build a passage way to the new city. It took Alexander six whole months to do this and when the task was completed, his troops carried out the attack, but were easily repelled because the walls of the new city were too high to climb quickly and too thick to be knocked down.

The historical account, recorded by Alexander’s chief historian, states that during the attack on the city of Tyre, one of the mysterious “Shiny Silver Shields”, which had been sighted years earlier, appeared again and attacked the wall with a “beam of light”, causing that part of the wall to collapse. Alexander’s men were then able to pass through the opening and capture the city.