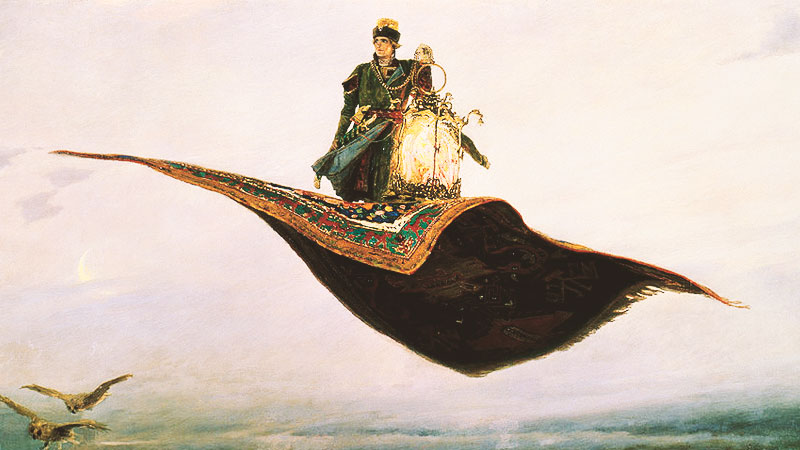 The flying carpet, or magic carpet, is a means of transport used in ancient tales and legends that have been incorporated into modern fantasy films.

The flying carpet skill is based on the myth of levitation that was popularized by the tales collection “One Thousand and One Nights” and the stories that make up the work have various origins, including North African, Arabic, Turkish, Persian and Hindu cultures.

Some evidence seems to indicate that the first stories of flying carpets came from Persia, known for its textile production and handmade Persian carpets have always been a highly prized luxury item, and began to be written down in the 9th century in Arabic language, but the oral traditions that refer to tales are much older.

But stories about flying carpets don’t just appear in the Middle East and in the Arabian Nights, references about these flying objects can also be found in Greek mythology, Norse mythology, Hindu Vedas, China and even biblical characters.

In Russian folk tales, Baba Yaga presents Ivan the Fool with a flying carpet that helps the hero find his way during his adventures.

Ancient Astronaut Theorists do not dismiss these stories as mere folklore and their origins could be based on advanced technological devices such as some sort of anti-gravity platform used by extraterrestrial visitors, which were misinterpreted by ancient cultures.

After all, as writer Arthur C. Clarke said: “Any sufficiently advanced technology is indistinguishable from magic.”

One Thousand and One Nights

The Arabic text talks about Princess Scheherazade, who every night told a story to her husband, King Shahyar, in order to postpone the wedding night.

During her tales, Scheherazade mentioned the wonders of magical flying carpets, a way used by the hero of the story Aladdin to travel quickly and silently from place to place without being seen or heard.

Phraates II of Parthia was the conqueror of Babylonia and ruled the Parthian Empire from 138 BC until 128 BC, and in the year 130 BC, his empire was attacked by Antiochus VII, ruler of the Seleucid Empire.

It is said that during a battle, King Phraates II traveled on a flying carpet that flew in the air as high as the Zagros Mountains. From his lofty height he rained fire on Antiochus and his army. After securing his victory, Phraates flew back to his land and floated on his magic carpet above the heads of his subjects who were celebrating the victory.

The Flying Carpet of Shapur the Great

Shapur the Great was the second Shah of the Sasanian Empire and reigned from 240 to 270.

In the year 260, during a war against the Roman army, he defeated the Emperor Valerian and, according to the stories, Shapur achieved this using a magic flying carpet.

Shapur would have managed to get into the Roman army camp late at night by flying high enough that the guards wouldn’t see him. So, he infiltrated Emperor Valerian’s tent while he was sleeping and captured him, using the flying carpet as an escape.

The Saga of Viktor and Blávus

This Norse saga recounts the adventures of foster brothers Viktor and Blávus who possessed a flying carpet and other magical abilities.

After some adventures involving vikings and berserkers, Viktor leaves for India to ask for Princess Fulgida’s hand in marriage.

After Viktor has his proposal rejected several times because Fulgida had been promised in marriage to King Soldán of Serkland, his brother Blávus travels to India disguised as a monk, cures Fulgida of a skin disease, and switches forms with her so that she can run away.

Blávus, then disguised as Fulgida, agrees to marry Sóldan on the condition that Rósida, Soldán’s daughter, was the maid of honor.

On the wedding day, Blávus kidnaps Rósida and flees on his flying carpet back to Frakkland, where the weddings of Viktor’s with Fulgida and Blávus with Rósida were celebrated.

Scholar Isaac Ben Sherira, wrote about King Solomon and the magical flying carpets described in Kebra Nagast, the book that tells the legendary story of the origin of the Solomonic Dynasty of Emperors of Ethiopia. In his writings, he claims that the Queen of Sheba hired a royal alchemist to make a flying carpet for her.

The carpet the alchemist made for the Queen of Sheba was the biggest and most beautiful of all he had ever made. It was made of green silk and had silver and gold threads intertwined and was decorated with precious stones.

When the magic carpet was ready, the Queen of Sheba sent it as a gift to King Solomon, who received it right in the middle of building the great Temple in Jerusalem, when he was too busy to admire the gift.

When the Queen of Sheba learned that the King had ignored her gift, she was heartbroken and swore never make a magic carpet for anyone again.

Another version of the story says that God gave King Solomon a magic carpet. The carpet was so large that it could accommodate 40,000 men on a flight.