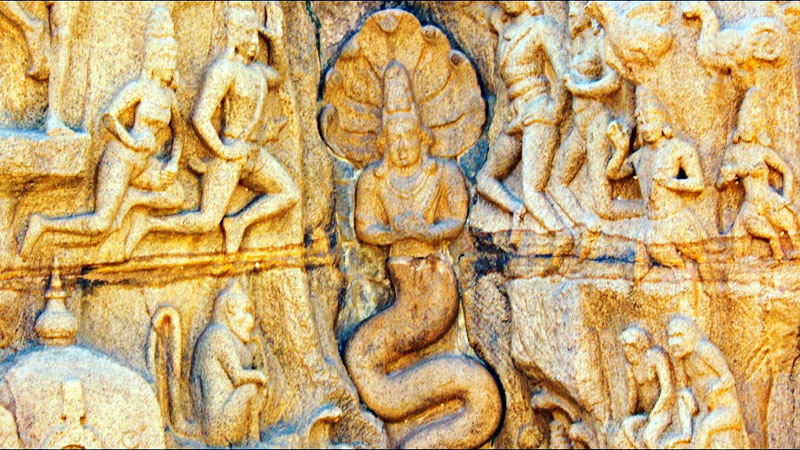 Everywhere in the world there is talk of “reptilian gods” who would be responsible for the creation of humanity and many ancestral cultures were connected with these beings, which are an essential part of various traditions and mythologies scattered throughout the world.

Interestingly, it has also been suggested by researchers that our brain contains in a “reptilian part”, which is responsible for instinctive and adjusted behavior, this part is responsible for generating feelings of territoriality, feeding and even mating.

Called the “Triune Brain Theory”, it was developed by neuroscientist Paul MacLean in 1970s and proposes that humans have the brain divided into three different functional units, each of these units representing an evolutionary extract of our nervous system.

The Reptilian Gods in Ancient Literature

The prehistoric and pre-Sumerian cultures Ubaid and Halaf have carved statuettes for about 7,000 years with representations of reptilian humanoid figures, with lizard-like characteristics, which were linked to wisdom and fertility.

The records of the Sumerian civilization speak of several deities that had similarity to reptiles, the Anunnakis, whose meaning can be translated as “those who came from heaven”, and according to the tablet “The List of Sumerian Kings”, approximately 445,000 years ago, these ancient gods came from another planet, called Nibiru, landed on Earth and created humanity.

The first literary works of Hindu history, the sacred texts called Vedas, mention the Nagas, the snake people. These divine beings were human-reptilian hybrid beings, who lived in underground cities and had the ability to take on human and snake forms.

The Mahabharata, the longest of the Hindu epics, containing more than 74,000 verses written in Sanskrit, mentions Patala-Loka and Bhogavati, two underground kingdoms where the Nagas lived.

These kingdoms were filled with elaborate palaces, where humanity’s greatest treasures were kept. It is believed that these places held great power and only a chosen few had access to these divine kingdoms.

The Nagas presented themselves as both friends and enemies. Like humans, they were known to be highly temperamental creatures, which caused disease and misfortune if someone stepped or crossed over their tails, although on other occasions they helped humans.

Evidence of Reptilian worship is found not only in Ancient Mesopotamia, but in many other ancient cultures around the world.

Throughout our history, several accounts associated with this strange alien race of reptilian beings who were worshipped by our ancestors have been found.

Japan’s folklore mentions that in antiquity there were Dragon Emperors, who descended from heaven to convey their great wisdom.

In Oceania, Aboriginal cultures claim that the descendants of a Reptilian hybrid race rule the world of the Earth’s underground.

The Chinese believe that humanity was created by Nakua, the serpent goddess.

In southern Africa we find the Chitauri, reptilian beings who came to Earth in search of gold and diamonds, creating humanity to serve them and work in the mines, and therefore humans were called “sons of the serpent”.

In Central America we have Quetzalcoatl, the god of wind, air and learning, whose name comes from the Aztec language Nahuatl and means “feathered serpent”, a reptilian being worshipped by the Aztecs, and then by the Mayans under the name of Kukulkan. The earliest records of his worship were found in the city of Teotihuacan and date back to the 1st century BC.

Similarly, Coatlicue, the “serpent woman”, was revered by the Aztecs as the goddess of life and death, mother of the gods, the moon and the stars and, along with Quetzalcoatl, symbolized snakes as a connection with wisdom and the cosmos.