Início English The UFOs of Chernobyl 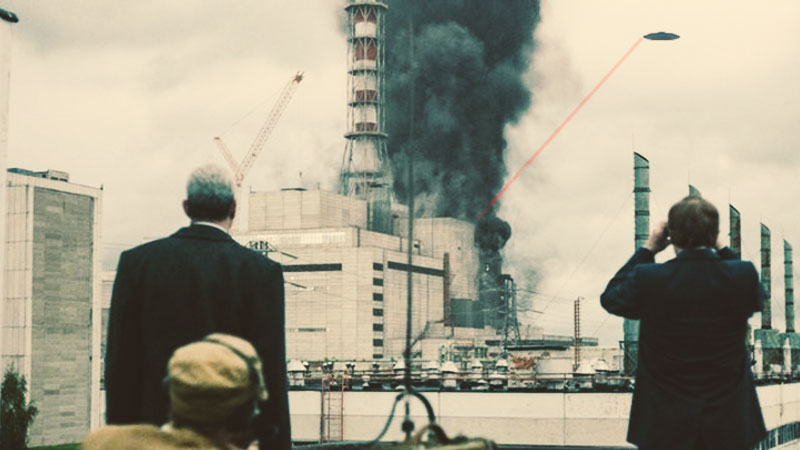 Chernobyl was the largest Nuclear Power Plant in the Soviet Union, consisting of 4 reactors that produced 1,000 megawatts of electricity each and also plutonium for the Soviet nuclear weapons program.

Some peculiarities of the low-cost design made the reactors dangerously instifiable when operated at low power and the plants did not have proper safety systems to contain a catastrophe that was bound to happen from the first day of operation.

At the time of the tragedy, there were 15 other nuclear power plants in operation with the same technical failures as Chernobyl, and two more reactors were under construction.

In the early hours of April 26, 1986, at 1:23 AM, a series of poorly organized tests resulted in the destruction of one of the chernobyl reactors.

The explosion, caused by overheated steam in the reactor’s cooling unit, threw radioactive debris from the plant into the atmosphere, left tons of radioactive material exposed and ignited the plant’s mechanical workshop.

In Pripyat, a town 2 kilometers away, locals admired the reddish glow of the top of the plant as firefighters, without adequate protective equipment, worked through out the night and managed to extinguish the fire several hours later, but this was just the start of the biggest nuclear accident in human history.

Over a month, hundreds of miners dug tunnels beneath the plant to install cooling equipments to prevent a new explosion from occurring, while other workers manually collected radioactive debris from the roof of the plant, which was inaccessible to the machines.

Winds spread radiation, equivalent to four Hiroshima atomic bombs every hour, across Europe, and 135,000 people living within a 30 kilometers radius of the Chernobyl Power Plant were evacuated from their homes.

About 600,000 people participated in the cleanup process, of which 200,000 were involved since the accident began, and received higher doses of radiation, needed specialized medical assistance for the rest of their lives and at least 3,000 died from radiation exposure.

Hundreds of armored vehicles, helicopters and other equipment used in the emergency needed to be abandoned as they became too radioactive. The town of Pripyat, which was home to 47,500 people, is now a ghost town and the surrounding area is still radioactive. In Belarus, more than two million people still live in a contaminated area.

During the following decade, after the worldwide exposure of equipment failure and much pressure from Russian scientists, all reactors in the Soviet Union were modified to prevent further disasters.

When catastrophic events began to occur in April 1986, some people saw a ship hovering over the Chernobyl Power Plant.

Eyewitnesses said a UFO had been there for six hours and that hundreds of people saw it, and over the course of a month, aircraft and helicopter pilots reported an increase in UFO activity around Chernobyl.

Mikhail Varitsky, one of the eyewitnesses, told the Russian newspaper Pravda:

“Me and other people on my team went to the blast site at night. We saw a fireball that was flying slowly in the sky. I think the ball was 6 or 8 meters in diameter. Then we saw two rays of reddish light that extended toward the part of the plant that was exposed. The object was about 300 meters from the reactor and the event lasted about three minutes. The object lights went out and it flew northwest. That’s when we noticed that the radiation level decreased almost four times, and that probably prevented a nuclear explosion.”

On September 16, 1989, just over three years later, the power-generating unit returned to the atmosphere. A few hours later, an object described as “amber-like” was seen in the sky above the Chernobyl Power Plant.

In October 1990, “Echo of Chernobyl” reporter V. Navran was photographing the Chernobyl Power Plant’s mechanical workshop and wrote: “I photographed the top of it, including a part of the hole above. I remember everything very well. I didn’t see any UFOs. However, when the film was revealed, one clearly saw an object that hung above the hole in the roof”.

Whether by intervention of extraterrestrials or not, fortunately there was no nuclear explosion of the reactor, which contained about 180 tons of enriched uranium inside. If the nuclear explosion had happened, half of Europe would have become uninhabitable for centuries and the effects of radiation would have affected every inhabitant of the planet.