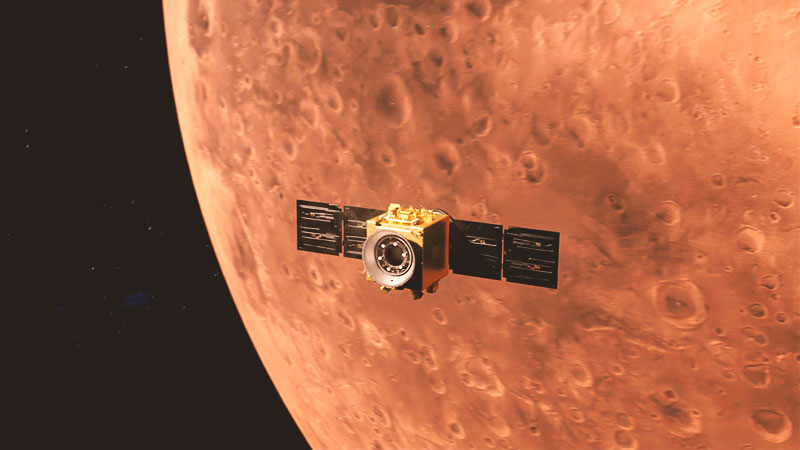 The Phobos Program consisted of sending two probes, Phobos 1 and Phobos 2, which were supposed to orbit Mars and do thorough studies of Mars and its two Phobos and Deimos satellites, and included the cooperation of 14 other nations such as Sweden, Switzerland, Austria, France, Germany and the United States.

In 1988, the probes were launched towards Mars, but Phobos 1 got lost on the way two months after launch, reportedly because of a radio command error.

Phobos 2 arrived on Mars in January 1989 and entered an orbit around the red planet, but shortly thereafter disappeared from the Russian tracking system in mysterious circumstances, not before sending back to Earth certain intriguing images of the planet Mars.

The mission went well until alignment with the Martian moon Phobos on March 28, when an elliptical object was detected moving toward the Soviet satellite. All indications were that the object had collided with the Phobos 2 probe, causing it to lose contact with Earth.

On the same day, TASS, the Official Soviet News Agency announced: “Phobos 2 was unable to communicate with Earth as planned after completing an operation around the Martian Phobos Moon. The scientists in mission control were unable to establish stable radio contact.”

The next day, a senior glavkosmos official, the Soviet Space Agency, said, “Phobos 2 is 99% lost forever”. At this point it is important to highlight the indication that the satellite was lost and not just contact with it.

On March 31 it was the turn of EFE, the European News Agency, to declare: “Phobos 2 took strange photographs of Mars before losing contact with Earth. An Unidentified Flying Object was photographed on the Martian surface. Scientists described that the object had an elliptical shape and 20 kilometers long! It was further stated that the photos could not be a trick or camera failure, as they were captured by two different cameras, as well as through infrared images. A controller on the space station claimed that the probe was spinning out of control, as if it had been hit by something”.

The last transmission of Phobos 2 was a photograph of a gigantic cigar-shaped cylindrical object, approximately 20 km long and 1.5 km in diameter, which was photographed on March 25, 1989 on the surface of Mars and became known as “The Shadow”.

After the last frame was radioed back to Earth, the probe mysteriously disappeared and according to the Russians, it was destroyed, possibly by a pulse beam of energy.

The engineer, decorated test pilot and Colonel of the Soviet Air Force, Marina Popovitch, said in an interview that the shadow sighted and the missing probe was the subject of a conversation between President Gorbachev and President Bush in December 1989, during the Malta Summit.

The cigar-shaped ship that appears in the penultimate photo taken by Phobos 2 is apparently the object that casts the oblong shadow on to the surface of Mars.

The Soviet government refused to mention extraterrestrial intelligence, although many of its best military and commercial pilots have made incredible reports of such sightings.

The sighting of the shadow on Mars should be enough to convince many that there may be intelligent life orbiting Mars.

Other Mysteries on Mars

In 1972, the Mariner 9 probe sent evidence of unusual pyramidal structures on the surface of Mars in the Elysee Quadrupter, and probes sent to the red planet in 1976, NASA’s Viking I and II, retransmitted images of a pyramid complex in the Mars area called Cydonia and the mysterious structure that became known as the “Face of Mars.”

In August 1993 another event occurred that caused tremendous unrest in the American space program. The Mars Observer spacecraft, sent to map the surface of the red planet in detail, was lost as it prepared to enter Mars orbit.

Signals were sent to pressurize the fuel tanks of the propulsion system, but the Mars Observer, which was supposed to receive and recognize the signal, never responded to commands.

Scientists concluded that the probe could have exploded when fuel tanks were being pressurized, but many believe the Mars Observer had a fate similar to that of the Soviet Phobos 2 probe.