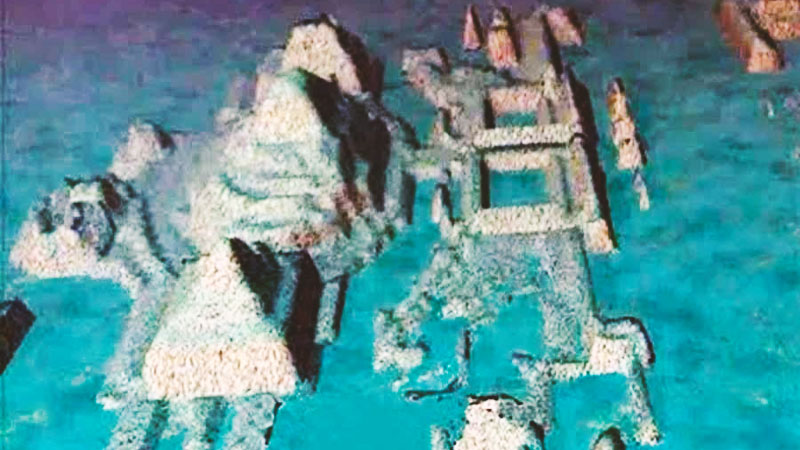 American scientists Pauline Zalitzki and Paul Weinzweig conducted studies on Cuba’s Guanahacabibes Peninsula and discovered a mysterious submerged structure of geometric and symmetrical stones similar to a city with stone structures, the submerged city of Cuba.

The purpose of pauline Zalitzki and Paul Weinzweig’s research had nothing to do with the search for submerged cities, but rather with the location of shipwrecks in the area during Spanish colonization and supposedly loaded with treasures.

However, lateral scanning sonar, capable of detecting any irregularities on the seabed, found some pyramidal and circular structures and large blocks of 2.5 to 3.5 meters high, found at a depth of 600 meters in an area of about two square kilometers.

In addition to the rock formations, structures similar to what appeared to be an arid desert were found in these deep waters near Cuba, on which symmetrically ordered stones were placed.

The team returned with a remotely operated vehicle, controlled by fiber optic cable and their cameras confirmed the previous discoveries, showing large granite-like blocks, between 2 and 5 meters long, which were cut into perpendicular and circular shapes, appearing an underwater city complete with roads, buildings and pyramids and bears a striking resemblance to the Mayan and Aztec temples of Mexico.

“Some structures within the complex can be up to 400 meters wide and up to 40 meters high. Some are sitting on top of each other. They show very distinct shapes and symmetrical designs of an unnatural type. We showed scientists in Cuba, the United States and elsewhere, and no one suggested that they be natural formations”, Weinzweig said.

These rocky structures have ridges, many with elongated aspects and the blocks in cubic and pyramidal form, which give the appearance of some kind of highly organized urban development.

The exact age of the underwater site is still unknown, although in 1966, Cuban archaeologists excavated a terrestrial megalithic structure on the west coast, near the new underwater discovery, which was dated to 4,000 BC by Carbon-14 tests.

If this dating estimate is accurate, it would mean that an ancient civilization designed and erected these vast stone structures in the Americas just 500 years after the first human settlements were organized into cities.

Weinzweig said it’s still too early to draw conclusions from the evidence collected so far and hopes to return again, this time with a mobile deepwater excavator, equipped with the functions necessary for archaeological evaluation of the site, including the ability to blow the sand from the stone.

A tempting but entirely speculative possibility for now is that the site could be related to the legendary Lost City of Atlantis, and these structures may have been submerged during a cataclysm.

In addition, an anthropologist affiliated with the Cuban Academy of Sciences said the photos taken from the video clearly show symbols and inscriptions, although it is not yet known in what language they were written.

Weinzweig says more information is needed and prefers not to speculate: “This is something of great potential scientific interest, but it is necessary to involve serious authorities in ancient civilizations”.

Geologists have recently raised the hypothesis that a land bridge connected Cuba to the Mexican Yucatan peninsula, and parts of the Cuban island are believed to have been submerged in the sea on three separate occasions in the distant past.

However, the idea that the Mayans were great architects and navigators should not be ruled out, so it is not entirely absurd that they could reach the coast of Cuba and build a city like this there.