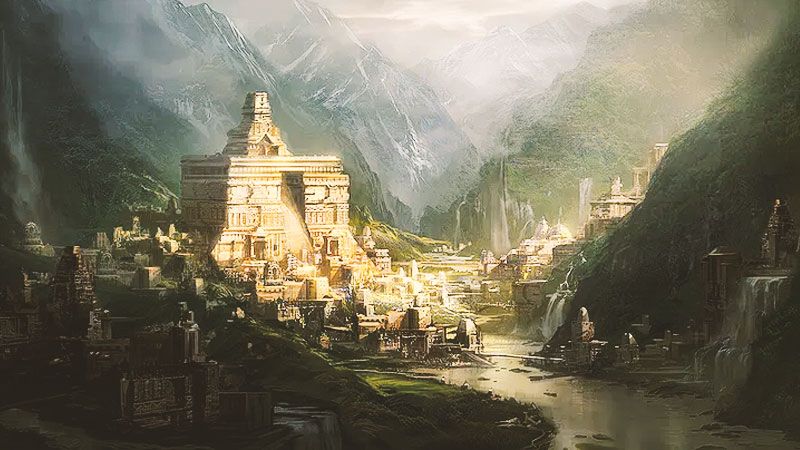 The first European travelers to Tibet constantly narrated the same fantastic stories about the existence of a hidden kingdom near Tibet, a center of hidden spiritual power.

Considering the legend in its most basic aspect, Agartha is considered a mysterious underground kingdom situated somewhere under Asia and connected to other continents of the world by a gigantic network of tunnels.

These passages, partly natural formations and partly the work of the race that created the underground nation, provide a means of communication between all points, and have done so since time immemorial. According to legend, large expanses of tunnels still exist to this day and the rest was destroyed by cataclysms.

The exact location of these passages and the means of entry are known only by certain initiates, and the details are carefully guarded because this kingdom is a vast deposit of secret knowledge.

Some claim that stored knowledge is derived from the lost civilization of Atlantis and the people who were the first intelligent beings to inhabit the Earth.

The first Westerner to popularize the legend of Agartha was the talented French writer Joseph-Alexandre Saint-Yves, a self-taught occult politician and philosopher who promoted in his books the establishment of a form of government called “sinarquia”.

He taught that the political body should be treated as a living being, with a spiritual and intellectual elite in power as its brain.

In his quest for universal understanding, in 1885 he decided to take lessons in Sanskrit, the classical and philosophical language of India.

He learned a lot more than I expected. Saint-Yves’s guardian was Haji Sharif, who was believed to be an Afghan prince, and through this mysterious character, Saint-Yves learned a lot about Eastern traditions, including Agartha.

Manuscripts of Saint-Yves’s Sanskrit classes are kept in the Sorbonne library, made with Haji’s exquisite calligraphy and, according to historian Joscelyn Godwin:

“Haji signed his name with an enigmatic symbol and called himself ‘Guru Pandit of the Great Agarthian School’. Elsewhere, it refers to the ‘Holy Land of Agartha’. Saint-Yves was informed that this school preserves the original language of mankind and its 22-letter alphabet, called Vattan or Vattanian.”

Saint-Yves soon discovered that his training enabled him to receive telepathic messages from the Dalai Lama in Tibet, as well as to make astral trips to Agartha and the detailed information of their encounters was converted into a series of books called “Missions”.

In the mission to India, it is narrated that Agartha is a land hidden somewhere in the east, below the surface of the earth, where a population of millions is ruled by a “Sovereign Pontiff”, who is assisted by two colleagues, the “Mahatma” and the “Mahanga”.

His kingdom, Saint-Yves explains, was located underground and hidden from the surface inhabitants at the beginning of kali yuga, which dates back to the year 3,200 BC.

According to Saint-Yves, the “Magi of Agartha” had to descend to the infernal regions beneath them to eradicate the chaos of the earth and end the negative energy and, from time to time, Agartha sends emissaries to the higher world, of whom they have perfect knowledge.

“Each of these scholars does his work in solitude, far from any light, under the cities, in the deserts, in the plains, or in the mountains,” Saint-Yves wrote.

Agartha also enjoys the benefits of advanced technology far beyond ourown. Not only the last discoveries of modern man, but all the wisdom of the time is stored in their libraries. Among its many secrets are those of the relationship of the soul with the body and the means to keep the souls of the dead in communication with the incarnated.

Saint-Yves states that the superior beings were the true authors of Sinarchy, and for thousands of years Agartha radiated Sinarchy to the rest of the world, which in modern times has been foolishly ignored and, when the world adopts the rule of Sinarchy, the time will come for Agartha to be revealed.

“I believe Saint-Yves saw what he described and did not consider the slightest degree of fiction in doing so. The proof is in its absolute seriousness and in the publications and correspondences for the rest of his life, which also deal with Agartha.”

Until the early 20th century, Agartha’s story remained only as a legend, spreading widely in Europe since the publication of Saint-Yves’s books, but evidence to support the allegations remained elusive.

In fact, it was logical to expect that in the new rational and materialistic century, these stories would eventually confine the realms of fantasy, a tradition that aligns with other ancient mysteries such as those of the lost continents of Atlantis and Mu.

The King of the World

Ferdinand Ossendowski was a Polish scientist who spent most of his life in Russia, and while he fled the Bolsheviks through “Mysterious Mongolia, the Land of Demons”, he often stopped to talk to Buddhist monks and lamas about the traditions associated with lakes, caves and monasteries.

Writing at the beginning of the last century, the traveler Ossendowski said he noticed that there were times in his travels to Mongolia when men and beasts stopped, stood silent and immobile, as if trying to hear something. Herds of horses, sheep, and cattle fixed their attention or crouched near the ground. The birds didn’t fly, the groundhogs didn’t move, and the dogs didn’t lat.

“Heaven and earth have stopped breathing. The wind didn’t blow and the sun didn’t move. All living beings in fear were unintentionally cast into prayer and awaited their fate. It has always been so, whenever the King of the World in his underground palace prays and seeks the fate of all the peoples of earth,” explained an old Mongol shepherd and hunter.

Ossendowski’s knowledge of the hidden kingdom came after he met a Russian-speaking priest named Tushegoun Lama and had also fled the Russian revolution and claimed to have a personal friendship with the Dalai Lama, then the supreme ruler of Tibet.

It was through Tushegoun Lama that Ossendowski learned the first signs of Agartha and was inspired to investigate the stories and finally make the first detailed modern account of the underground kingdom in 1922, when he published the book “Beasts, Men and Gods”.

During his trip, Tushegoun Lama told Ossendowski about the miraculous powers of tibetan monks and the Dalai Lama in particular, and continued, “But there is also a man of even greater and holier reach, the King of the World in Agartha.”

Later, another Tibetan named Prince Chultun Beyli told Ossendowski that 60,000 years ago a holy man led a tribe of his followers on Earth.

They settled there, under Central Asia, and with the use of incredible wisdom, the power of the holy man and the work of the people, Agartha became a paradise. Its population grew to millions and all were happy and prosperous.

The prince also adds the following information: “The Kingdom is called Agartha and extends through all the underground passages around the world. These cities and underground spaces are governed by rules that owe allegiance to the king of the world. In the two largest oceans of the east and west there were formerly two continents, and they disappeared under water, but their people entered the underground kingdom. In underground caves there is a peculiar light that produces the growth of grains and vegetables and gives people a long, disease-free life.”

Ossendowski understandably found this intriguing and confusing, but nevertheless, he was convinced that he had found something more than a legend, probably a powerful force of some sort, evidently capable of influencing the course of life on planet Earth.

Interestingly, Ossendowski reports that the enormous power that the people of Agartha had could be used to destroy entire areas of the planet, but could also be used as a means of propulsion for the most impressive transport vehicles.

It has been suggested that this could be a prediction of nuclear energy and flying saucers as early as 1922, long before these issues were discussed.

Ossendowski closes his book with the prophecy of the King of the World, in which it is claimed that materialism will devastate the earth, terrible battles will end with the nations of the world, and at the climax of the bloodshed in 2029, the people of Agartha will leave their underworld.